Our e-Essays project is now LIVE!

Previously-released essays are available here, and each month a new essay is available for free with any other purchase. To be added to the mailing list, subscribe here!

This set of essays considers how various conceptions of the ‘nation’/statehood — the Peshwai, the British Raj, the Indian state — have negotiated their relationship with their women ‘citizens’, and vice versa. Discussing how gendered and casteist social codes created paradigms for the ‘pure’ (Brahman, male) citizen (as exemplified by the Peshwai reign) in Indian polity, Uma Chakravarti chronologically points the way towards Radha Kumar’s essay, which engages with how women, when finally considered (future) citizens of a to-be-independent India, began to take part in civil disobedience and nationalist projects of the early 20th century. Farida Abdulla picks apart the ways in which independent India’s nation-building project now re-negotiates, through violence and armed conflict, Kashmiri women’s citizenship as one forged in terror and precarious kinship. This month’s free essay is a complement to these others, focusing on the metaphor of the nation as home in Indian women’s writing.

1. ‘TOWARDS BECOMING ‘THE MOTHERS OF THE NATION” by RADHA KUMAR, from THE HISTORY OF DOING: AN ILLUSTRATED ACCOUNT OF MOVEMENT FOR WOMEN’S RIGHTS AND FEMINISM IN INDIA, 1800-1990 (1999)

This chapter from The History of Doing focuses on the late nineteenth century and early twentieth century, when social reform movements in India were beginning to show results and women were becoming more visibly present in the public sphere. Kumar provides a thematic history of the women’s movement before independence, beginning with focusing on the 1889 session of the Indian National Congress in Bombay where ten women delegates attended the assembly for the first time.

Using photographs and a wide variety of print sources from books to newspapers, Kumar looks at how women’s issues were raised and how women were involved in addressing these. The essay discusses at length the steps taken to regulate prostitution by the British in India and the level of support this received from reformers and moderate nationalists. The turn of the century saw a proliferation of homes for widows, with schemes to train widows as teachers. The Swadeshi movement in Bengal during this time period marked the beginning of women’s participation in national activities on a larger scale. Kumar offers detailed portraits on the lives of some of the women involved in the above movements and reforms like Swarnakumari Debi, her daughter Sarala Debi Ghosal and Bhikaiji Cama.  21 pp. Read more.

Dr. Radha Kumar is the Chair of the United Nations University Council and the Director General of the think tank Delhi Policy Group. She has published various books and journal articles, and her work looks at ethnic conflicts, peacemaking and peacebuilding from a feminist perspective.

2. ‘A LIFE OF PEACE AND DIGNITY’ by FARIDA ABDULLA from SPEAKING PEACE: WOMEN’S VOICES FROM KASHMIR (2002)

Written by Farida Abdulla, this essay is a personal account of her experience in Kashmir – before, during and after the enforcement of centralized government rule over the area. Born and brought up in Kashmir, she reflects on the seething resentment of people treated like more border territory than citizens of the country.

Through the essay Adulla looks at ‘what’ instead of ‘why’ – she does not delve into the historical context for the rule, but focuses on the effects of such a rule on the local population. By narrating two incidents strongly embedded in her mind, she attempts to show the complexity of the situation, and the pain and confusion of the people living there. 6 pp. Read more.

Farida Abdulla is professor, Educational Studies at the Jamia Millia Islamia in Delhi where she headed the same department from 2007-09. She has taught psychology and education in departments of Education of Jawaharlal Nehru University and at the Central Institute of Education of the University of Delhi. 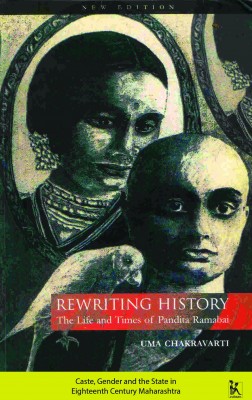 3. ‘CASTE, GENDER AND THE STATE IN EIGHTEENTH CENTURY MAHARASHTRA‘ by UMA CHAKRAVARTI from REWRITING HISTORY: THE LIFE AND TIMES OF PANDITA RAMABAI (1998)

This essay discusses caste, gender and the state, and the relationship between the three in the context of militarisation under Peshwa rule in eighteenth century Maharashtra. Analysing materials available in the Peshwa daftar, Uma Chakravarti illustrates the different ways in which the state played a decisive role in upholding the caste system and in installing social codes to legitimise women’s sexuality.

Chakravarti points out how the Peshwa state upheld Brahmanical social order by prohibiting ‘untouchables’ from approaching the temple of Vithoba (which also housed a shrine for Chokhamela, a saint belonging to the Mahar community), threatening punishment if they failed to conform. She also explores ideological structures of enforced widowhood, the difference in punishment that women and men who committed adultery faced, and the role of the state in arranging marriage for girls between ages seven and ten. Connecting caste with women’s sexuality, the essay gestures towards Brahmanya’s investment in the undiluted purity of its women. 42 pp. Read more.

₹70.00
Dr. Uma Chakravarti is a feminist historian who taught at Miranda House, Delhi University. She writes on Buddhism, early Indian history, the 19th century and on contemporary issues.

FREE IN OCTOBER, WITH THE PURCHASE OF ANY OTHER ESSAY:

Geetanjali Singh Chanda explores, in this essay, the idea of the nation and its representation as a house or home in postcolonial Indian English literature. The author identifies that this literature has a dual parentage that manifests in its narratives, where characters with fragmented identities negotiate to make India their home.

Chanda explores this depiction of ‘Indianness’ through three prominent literary works: Nayantara Sahgal’s Rich Like Us (1983), Meena Alexander’s Nampally Road (1991), and Arundhati Roy’s The God of Small Things (1997). She focuses on the treatment of history within these narratives, and the struggle of characters to reconcile their personal or national history with the post-colonial present. This is done by connecting the events in the text to a significant historical event – like the Indian Independence in 1947, or the Emergency of 1975. 37 pp. Read more.

A note on pricing, frequency and format:

The e-Essays project is a new initiative from Zubaan, undertaken to make our near-fifteen years of feminist research more accessible to our readers and community. New essays are released in sets each month, curated to a theme; subscribers receive each curated set in their inbox. The essays range from just a few pages to 100-page chapters, and we’ve therefore created three pricing tiers: 50, 70 and 95 rupees. Responses to our test survey in March indicated that a majority of readers would be willing to pay up to Rs. 100, so we’ve kept even the longest essay under that amount. The vast majority of our readers also included PDFs in their preference of format, and we have accordingly standardised all our essays in PDF files.
If you’re interested to see what’s coming next, make sure you’ve joined our mailing list, and keep your eye out for the next mailer/blog post. Happy Reading!
Tags: caste, e-essays, history of doing, Kashmir, nation, radha kumar, uma chakravarti

Due to the COVID-19 pandemic, we are only selling ebooks at this time. Dismiss